Hiiii everyone! Madi here again! Sorry for the late post with this one. To be honest, it took all my energy to write about this episode at all because I am so over it already haha! I’ve never felt this way about a season before, and I am sooo thankful to know that the Clare era is basically over. I feel terrible saying that, but let’s just get into it and chat!

I’ve felt bad energy from Yosef since basically the first moment he was on our screens. Something just seems off and he put a bad taste in my mouth. When I saw this drama unfold in essentially the first 10 minutes of the show, I was a little surprised since this was the big teaser since the beginning of the season. I knew that just meant something “juicy” (as my friends and I say) was coming, but more on that soon. From the moment he sad down with Clare it all just felt so accusatory and gross, I mean… he barely has spoken with her to know much about her. Not to mention, did he not do his homework before coming on this show? I said it last week, although I didn’t love that they did strip dodgeball, I don’t think it was worth defaming her character over. It probably wasn’t even entirely her idea. Also, have any of you see the drama about Yosef outside of Bachelor Nation since the show aired? If not, definitely look that up because he is the complete opposite of a saint. More like gross. He is also in Barkley + Co ads in his underwear – all over their instagram, but that’s besides the point. All around he is just a fake, manipulative man. 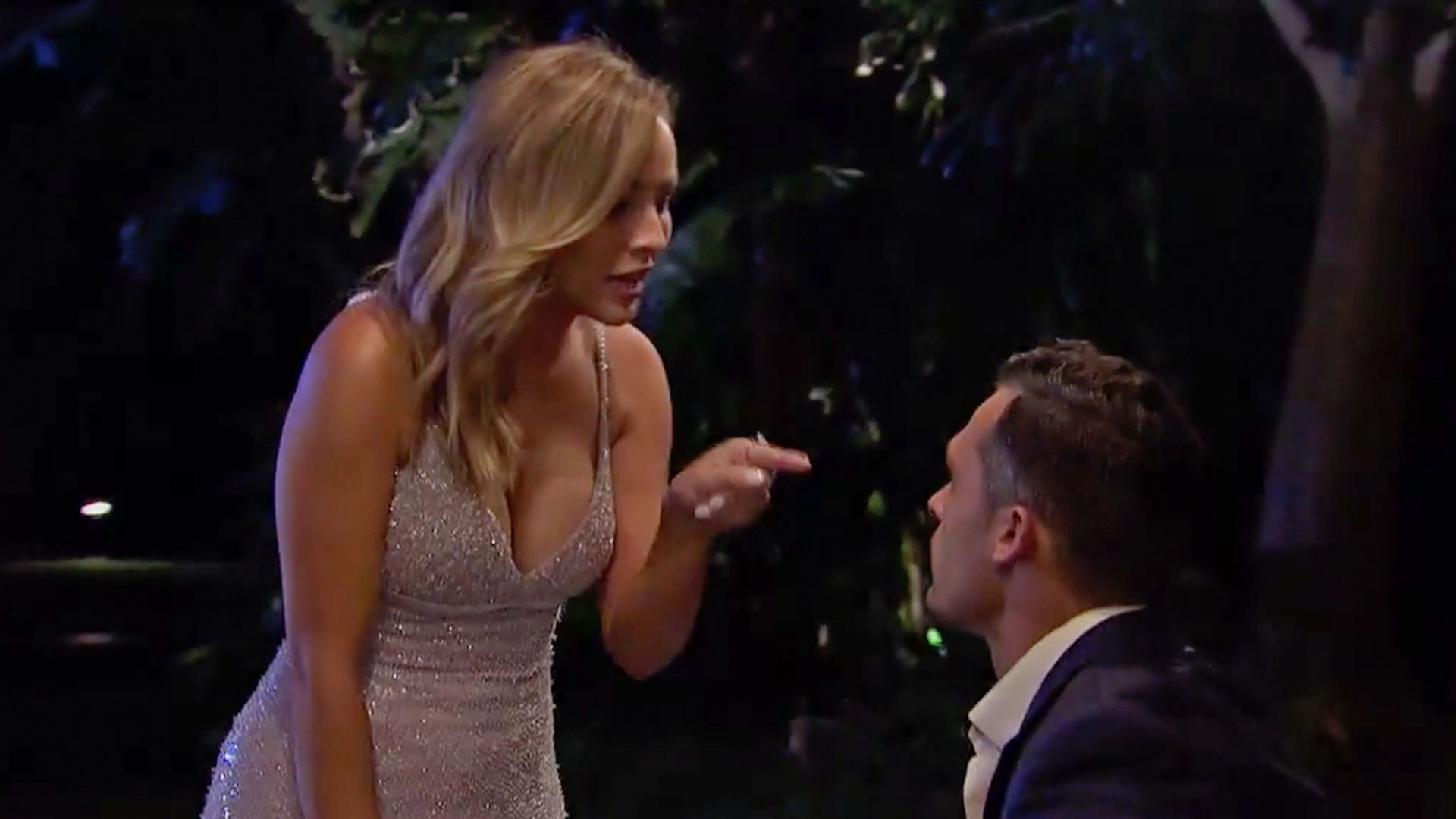 When he was walking out screaming about her being the oldest Bachelorette, I feel like he was purposely causing a scene because he wanted air-time. In fact, I feel like that’s what all of this was about. Not because he cared that anyone was in their underwear. He wanted a reason to talk to her and for there to be drama. As far as Clare goes, I do think that she listened to as much of his BS as she could before having enough and I am glad she stuck up for herself. For someone that knows little to nothing about her, he could have said much less to get his point across and left. “I am ashamed to be associated with you”. Really? Okay, Yosef.

The one part of this situation that I still has me scratching my head is that so many guys jumped up to her defense and went to help her and she basically ran away from all of them. Then Dale came to help later (not sure where he was when this unfolded) and he was her knight in shining armor! I believe she even told Deanna that he was the one to come over to her when it happened. Forget all the other guys I guess? Haha!

Man oh man, this episode just keeps getting worse and more cringy. There were a few times that I felt like he was going to make a move but was friend-zoned. So I truly believe the fumble at the end when she went to kiss him came from utter shock. I rewinded a few times and I did not see him pull away, he was just still. I mean honestly maybe he was surprised and also she was flying at him with force so maybe he thought he was standing steady? I just think it was definitely miscommunication. If anything, to me it looked like she went to kiss him and then all of the sudden was like “wait no, Dale is waiting for me!!!” and stopped herself. Her stop was very sudden and unnatural. 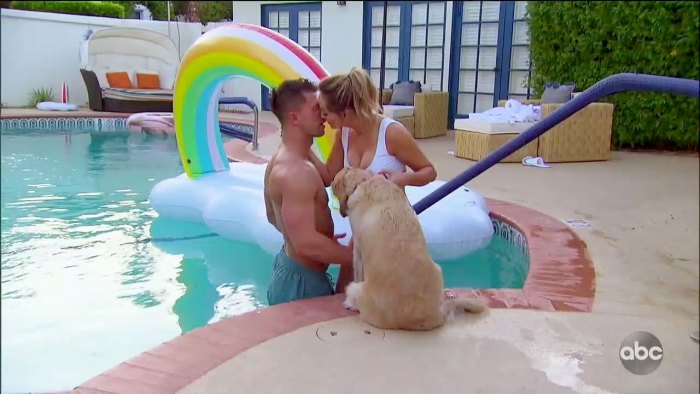 I do think when he got out of the pool to chase after her it was aggressive, but unfortunately I don’t think he saw that because he was caught up in trying to figure out what happened. I also think he ran after her to prove he wanted to kiss her because she keeps telling them that she likes bold men who go after what they want. This was just a lose-lose scenario, but I think Clare’s role played a huge part in how that happened. When they showed her crying in the bathroom, I was surprised because yes it was aggressive but it wasn’t in a mean scary way. But maybe it was for her and I can’t be the judge of that! It could definitely be based on a past experience that triggered her, and I definitely feel for her! I was just surprised. I also am not quite sure, but I think this is the first contestant to be fully sent home by Chris Harrison?

I am not sure that we even needed 3 episodes to know that this season is ALLL about Dale. I want to give her the benefit of the doubt because it seems like she has blinders on due to her love for him, but I just feel like she is being so disrespectful to the men and the their time. To have a group date, cancel the day portion, hide with Dale for an hour and then ask producers to wrap it up… she clearly doesn’t care about their time. I tried to put that in a nicer way but I just don’t know how. I was shocked that she let Dale come in and interrupt her and Jay when he was “lost”. Their giggles were just out of control and like they truly were hiding something from the other guys. I mean, they were lol. I feel for the guys, I truly do! 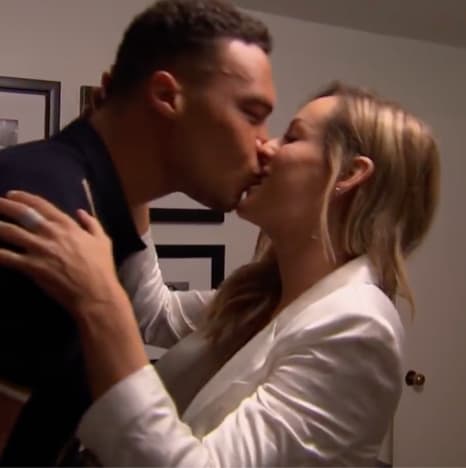 Then the whole roasting date… that Dale technically wasn’t even on. I thought it was soo funny and I can’t understand why Clare wasn’t getting that there is a common denominator – and that all the jokes were about him mostly because the guys are feeling a certain way. It’s not that they aren’t respecting the process or her finding love, it’s that they are starting to wonder why they are even there because he is the ONLY one getting attention. I mean we usually are so torn on who the lead is going to choose in the finale for a reason and that’s because a single person isn’t singled out when there are still what, like 18-20+ men left? I loved the audience reactions to this, especially Eazy! Hah! I know some people don’t love him but I think that he is so great. 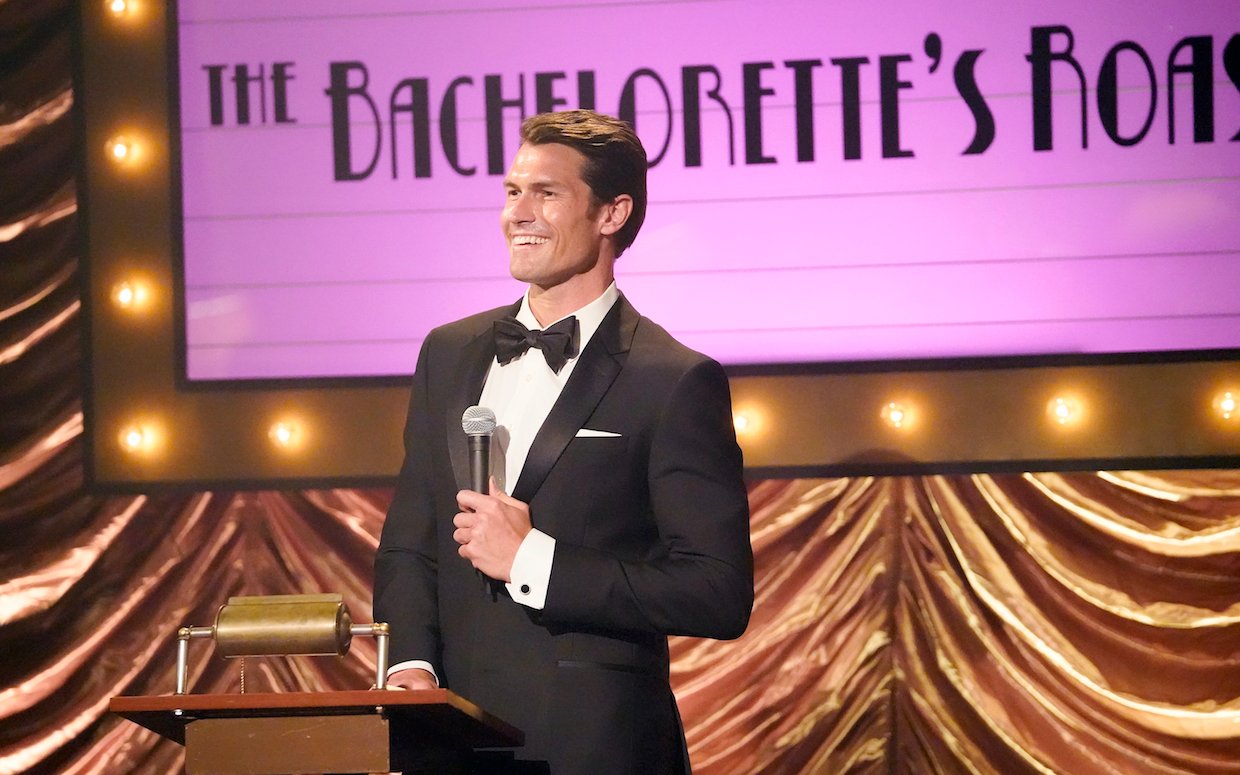 The fact that the entire date, even cocktail party, was centered around Dale was too much. She was truly having the same convo over and over by choice. When I was watching, it reminded me of Kady from Mean Girls when she couldn’t stop talking about Aaron Samuels and then I ended up seeing something like that on Twitter this morning and I am so glad that I am not the only one. I feel like she NEEDED to talk about Dale, and the only way to do that was to talk about the roast. Even when guys said they wanted to spend time getting to know her, the convo still stayed on Dale. At this point, I think it became 100% apparent to them that she had made her choice. I was just trying to think of who was the one asking if she’s shown interest in any other guys and I can’t even remember multiple guys names from that group date, which is crazy to me! We’ve truly barely gotten to know many of them. I think Bennett was trying to give her the benefit of the doubt but also was starting to see what the other guys were saying. And sticking with my reaction from last week, I really am loving Bennett more and more!

And thank you to Celia in the comments who reminded me that I didn’t mention that she did not give out a rose at all at the end of the date and told them that she didn’t get what she was wanting from them?! I was so confused by this. The men went along with the roast (and she was laughing at different jokes that were sans Dale) and I think it was rude and unfair to the men to not give one to anyone. I know she’s looking for her husband so maybe now with Dale she can’t see any of them as her husband and doesn’t want to give another out. If you think about, right now Dale is the only one with a rose from this week since Zach went home.

Ah! That teaser at the end. I think this really means that we will be getting Tayshia as our next Bachelorette and sooner than any of us imagined. I hope that’s the case, I really love her! She is so down to Earth and funny! Not to mention I feel like she deserves this shot at love!!! Can’t wait to see what happens next week with both Clare and Tayshia! If she is the new Bachelorette, I’m wondering if some guys wills stay and some will leave? Will some guys come back? Like poor Tyler C that was just telling the truth about Yosef! We will see! 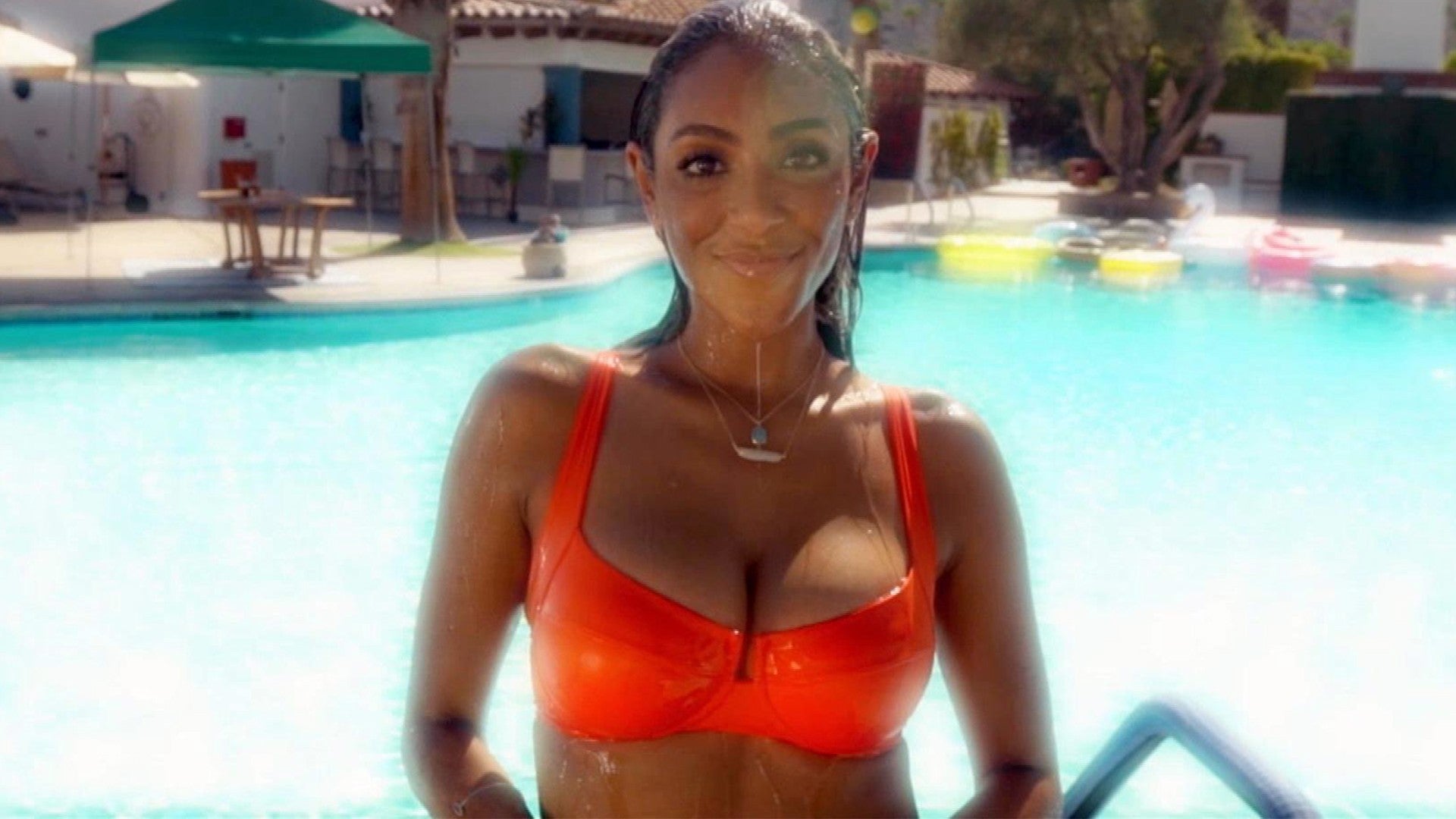 I have been loving sharing all my thoughts with you each week on this season of the Bachelorette so far! I know Ali might be back to writing soon, but thanks so much for having me in the meantime! I love chatting with you all, both here and on the FB group!

While you’re here, I am going to add a snippet from Ali’s blog last week about best gifts for kids this holiday season! I have seen so many posts about presents in the FB group so I thought I’d add another idea here!

“Okay so this one isn’t musical, but my kids LOVE it so I had to include. To be honest with you guys, I didn’t buy this gift. It was sent to us by a PR company that reps this brand. And I almost gave it away because we are moving. But one day while I was packing stuff up and just really needed the kids to have something to keep their full attention and I didn’t want to put on a tv show, I decided to grab this and let them open it. Oh my gosh the giggles that ensued were so much fun! SO much so that I just watched them play with it instead of getting anything done! Ha!

They keep calling our new pet, Owen’s sibling! They know how much they love each other and having a sibling and now they love that Owen has a little animal friend to love just as much as they love each other. You might’ve seen me post to Instagram stories about it and if you did then you know how excited they got! You pull a little tab and the puppy unwraps itself from the box and comes out barking and jumping around.”

Read more about the gifts she recommends here! 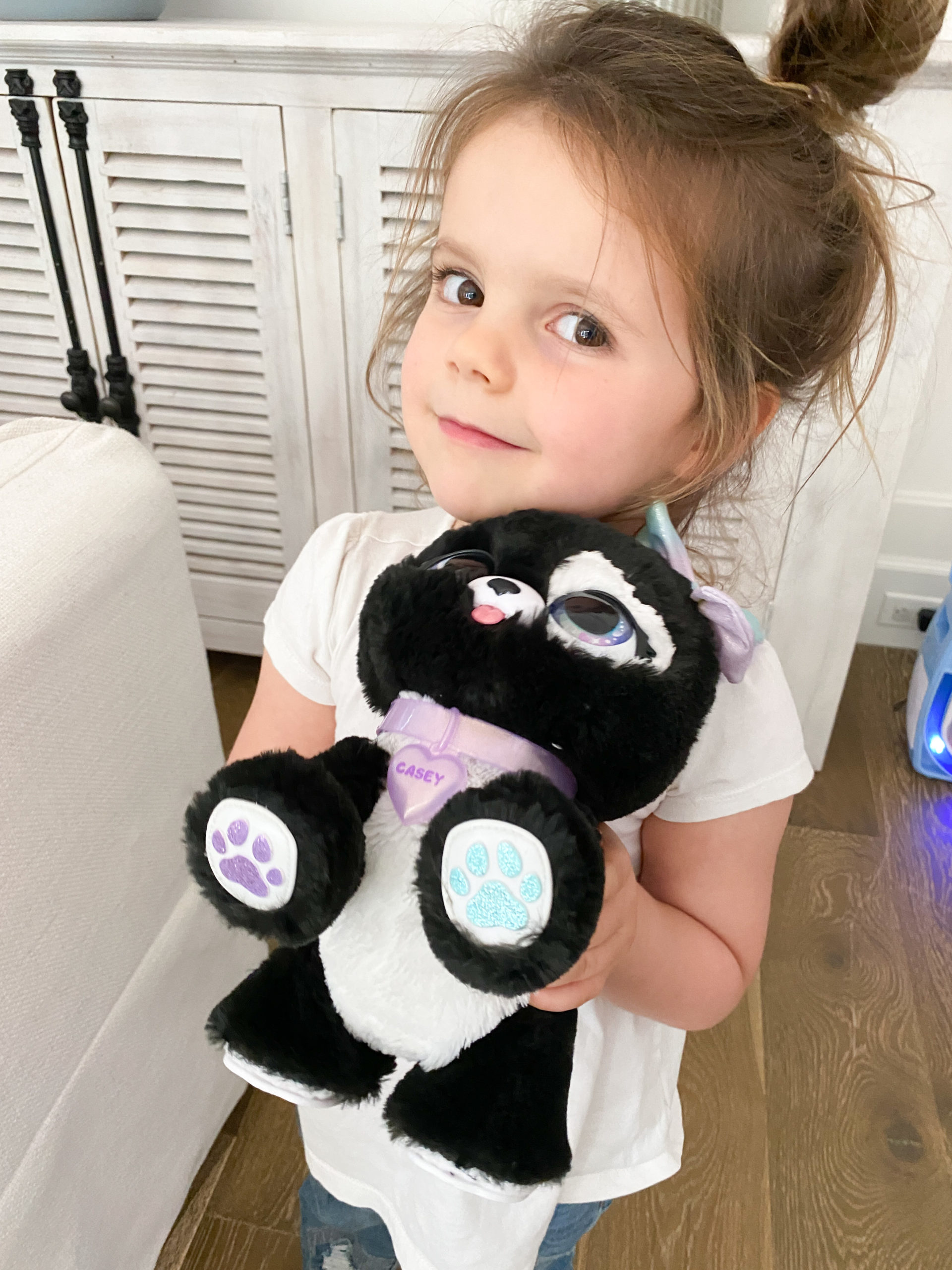